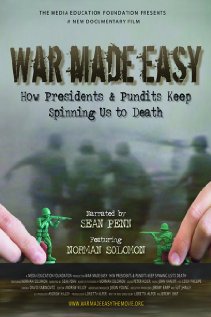 Â«War Made EasyÂ» reaches into the Orwellian memory hole to expose a 50-year pattern of government deception and media spin that has dragged the United States into one war after another from Vietnam to Iraq. Narrated by actor and activist Sean Penn, the film exhumes remarkable archival footage of official distortion and exaggeration from LBJ to George W. Bush, revealing in stunning detail how the American news media have uncritically disseminated the pro-war line of one administration after another.

Â«War Made EasyÂ» gives special attention to parallels between the Vietnam war and the war in Iraq. Driven by media critic Norman Solomon's meticulous research and tough-minded analysis, it sets stunning examples of propaganda and media complicity from the present within the context of rare footage from political leaders and leading journalists of the Vietnam era, including Presidents Lyndon Johnson and Richard Nixon, Defense Secretary Robert McNamara, dissident Senator Wayne Morse, and news correspondents Walter Cronkite and Morley Safer.

Norman Solomon's work has been praised by the Los Angeles Times as "brutally persuasive" and essential "for those who would like greater context with their bitter morning coffee." This film now offers a chance to see that context on the screen.
Anonymous - imdb


If the video is not working please click "Submit" so it can be replaced.